Plastic pollution is a major concern to our oceans, wildlife, and planet.

Cities, states, and entire countries are starting a movement to ban the use of single-use plastic.

We have put together a list of must-know facts about plastic pollution to frame how dire the problem is.

What is Plastic Pollution?

How Does it Get In The Ocean?

Why Is Plastic Pollution So Much Worse Than Other Types of Pollution?

As we all know, plastic is a strong and durable material. The reason why we produce so much of it because it is a cheap and durable solution. The problem is when plastic is improperly thrown away it takes a long time to break down naturally.

Most plastics will last 450 years in most environments and they don’t really ever disappear completely. Instead, they break apart into smaller and smaller pieces until microscopic. Those microscopic pieces never fully disintegrate and ultimately end up in the sand, the ocean, and wildlife’s bellies.

Plastic pollution is harmful to humans too

If you’re a fish eater, you’re going to want to pay attention to this. If animals such as fish are consuming plastic, and then we consume the animal, in this case, fish, guess what? We are eating plastic! About one in three fish that are caught for human consumption contain plastic.

Sure, it may be small, negligible amounts, but if you’re a seafood lover, you have to begin to ask yourself just how much plastic we are consuming and how harmful it is for you.

Plastic has the ability to absorb chemicals that have been linked to endocrine disruption and even some cancers. By polluting our waters, we are polluting a source of our food, and ultimately, polluting ourselves. Talk about a vicious cycle. 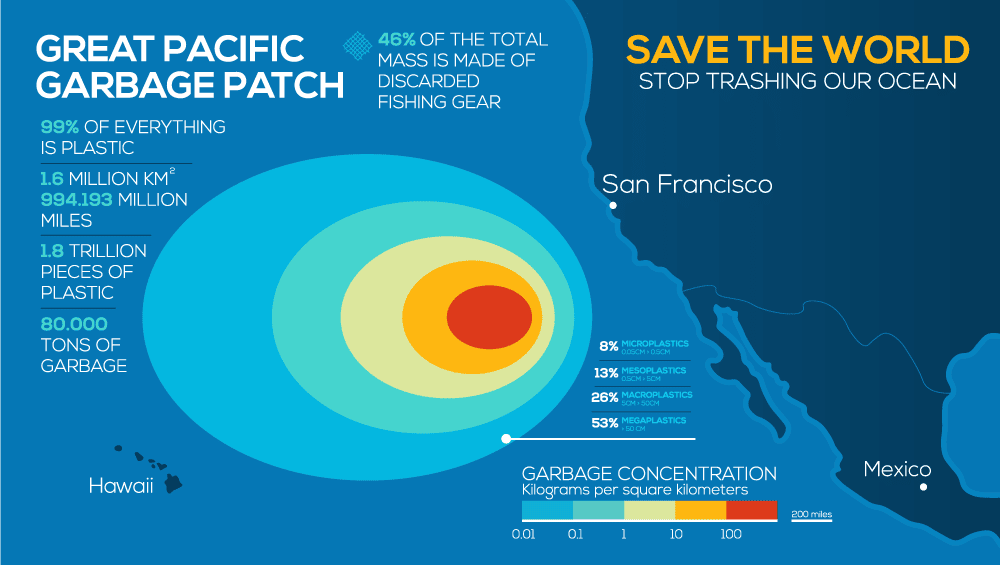 In case you haven’t heard of the Great Pacific Garbage Patch, it’s an area in the North Pacific where a slow swirling whirlpool of ocean currents collects plastic debris. Charles Moore, an oceanographer who discovered this phenomenon, estimates that the patch will grow to double its size within the next ten years.

This might not mean much at face value, so to put things in perspective, the patch is currently twice the size of France. This isn’t an easy cleanup, considering the plastic is fragmented, broken, and floating around a massive body of water. It has been estimated that it would take at least 67 ships one year to collect just 1% of the plastic waste in the Great Pacific Garbage Patch.

Since 1950, it is estimated that around 8.8 billion tons of plastic have been produced worldwide

This number might not seem significant, but in reality that is equivalent to the weight of over 800,000 Eiffel Towers. Can you imagine what 800,000 Eiffel Towers would even look like? Sadly, only about 9% of this plastic has been recycled. It is estimated that between 1.1 and 8.8 metric tons of plastic enter our oceans from coastal communities each year.

Like we mentioned before, most of the plastic that gets into the ocean is not picked up or recycled. A piece of plastic as small and lightweight as a plastic bag can take 100-300 years to degrade.

To put this into perspective for you, about 2 million plastic bags are used every minute, which puts us at an estimated 500 billion to 1 trillion plastic bags being used each year. Think of how much we can reduce by simply switching to reusable cloth bags.

Our plastic consumption is growing exponentially

In 1950, the world’s population was around 2.5 billion. At that time, about 1.5 million tons of plastic has been produced. Today, our population sits at about 7 billion and we have produced over 320 million tons of plastic. If we don’t start making conscious changes, this number is set to double by the year 2034. That’s only about 35 years from now (based on current publication of this article).

Since we’re using so much plastic, it might seem like something super important. After all, why consume so much of this material if we’re not in need of it and we know it is causing pollution? Well, you may be surprised to know that most plastic really just ends up going to waste.

A lot of the plastic that we use is for quick and easy use. Plastic is thought of as very disposable material. Think about the last barbecue you had. You could have easily served your guests with silverware and glass plates/cups.

However, because of the convenience and the quick clean up, you opted for plastic utensils, cups, and plates. These items are used once, for a few minutes while you eat, and then you get rid of them forever. It is because of our dependency on ease of use that we create most of our plastic pollution problem. 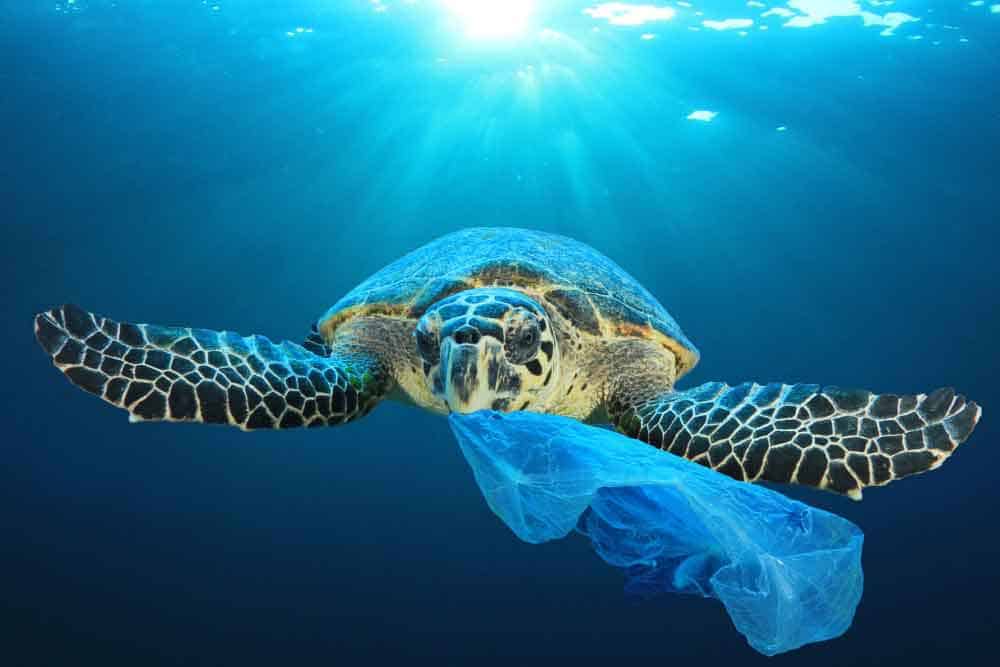 Now you may be wondering what we’re talking about here since we did mention plastic recycling programs and both proper and improper disposal. We even talked about the time it would take for plastic to degrade.

Well, yes, over time, plastic does fragment into smaller and smaller pieces, even if it takes significantly longer than most other recyclable materials. A plastic bottle can take up to 450 years to degrade in a marine environment. Plastic will continue to fragment until it is broken down to just microscopic pieces.

While not visible to us, these microscopic pieces of plastic never completely disappear. Instead, this is what we know to be microplastics. We are still co-existing (in some form) with every bit of plastic that has ever been produced.

Some states in the US have made unnecessary plastic use illegal

Many states that are trying to do their part in the fight against polluting our planet have started passing legislation that bans unnecessary plastic. California became the first state in the US to impose a statewide ban on single-use plastic bags in retail stores.

There was also a 10 cent minimum charge for the use of recycled paper bags and other compostable bags. While the bill was enacted in 2014, it was not until the 2016 election, where the issue was on the ballot, that the ban was approved.

Though not officially recognized by law, many counties in Hawaii also have bans on single-use plastics and paper bags that are not made of at least 40% recycled materials.

In 2009, D.C. also enacted a single-use plastic and paper bag ban where users would have to pay a 5 cent charge for each bag. In 2019, New York is the third state to ban plastic bags. The ban is set to take effect in March of 2020.

While yes, we can make efforts to clean up the plastic pollution that currently exists, that doesn’t address the long term problem: the continued use of unnecessary plastic.

Plastic is an important material and should be used. It is a key part of items such as computers, disposable syringes, and even construction hard hats. However, we don’t need plastic straws and we don’t need to use plastic utensils during our backyard cookout.

There is a lot of pollution that we will never be able to reach, especially at the bottom of the oceans and microplastics. What we can do now is to reduce our use. We can look for alternative packaging for disposable items and bring a reusable water bottle with us from now on.

These small changes may not seem like much, but if you replaced your daily plastic lunch fork with silverware from home, in one year, that plastic adds up. Reducing our use of unnecessary plastic will reduce pollution in the ocean and the microplastics in the air we breathe.

We use more than 500 million plastic straws each day.

Because of how small straws are they are hard to recycle and very rarely make it to the recycling centers.

Plastic straws are one of the top polluters on our beaches and can be harmful to animals.

Feminine product single-use plastic wrappers and applicators cannot be recycled and end up in landfills or the ocean.

Balloons made 5 Gyres requested ban list for plastic products. It does not matter if the balloons are latex or mylar balloons are very harmful to our environment and almost never get recycled.

Cigarette butt pollution leeches toxic chemicals into the sand and water of our beaches that remain polluted for as many as 10 years.

Each day, about 8 million pieces of plastic pollution end up in our oceans.

100,000 marine mammals and turtles and 1 million seabirds are killed by plastic pollution annually.

Since the 1950s, about 8.3 billion tons of plastic have been produced worldwide.

In some parts of the world, the use of plastic is illegal. In Kenya, if you are caught producing, selling, or even using a plastic bag, this is punishable by imprisonment of up to 4 years and fines of $40,000.

A plastic bag is only used for an average of about 12 minutes. They can take up to thousands of years to completely decompose.

World plastic production has doubled over the past 50 years.

Tens of billions of plastic bags of chips are produced each year.

All plastic produced never really goes away. It breaks down and fragments into smaller and smaller pieces over time, reducing to microplastics that still exist in the air we breathe.

California became the first state in the US to impose a statewide ban on single-use plastic bags in retail stores. There was also a 10 cent minimum charge for the use of recycled paper bags and other compostable bags.

The Great Pacific Garbage Patch, an area in the North Pacific where a slow swirling whirlpool of ocean currents collects plastic debris, is growing. It is currently twice the size of France.

Henderson Island in the South Pacific is the most plastic polluted of any island recorded to date.